THE SIMPSONS – ON THIS DAY 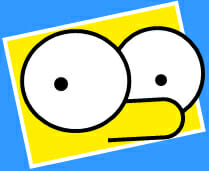 Arguably the most successful and renown animated television shows ever, The Simpsons is still going strong. Along the way its been criticised and applauded, banned and re-booted, but the fact it is still going and it has been for 29 years to the day really does explain the seismic impact its had on the world. We’re going to look at why its been so successful and the legacy it has left in its unprecedented wake.

The show is so relatable, which is one of its main selling points to a whole host of demographics and age ranges. It follows similar comedic tropes to other sitcoms and soaps, following seemingly normal characters in a normal/mundane environment, just with added nonsense from weird and wonderful storylines.

The idea for the show was conceived in 1987, when  James L. Brooks wanted to include small animated sketches before and after the adverts on The Tracy Ullman Show. This lead Matt Groening to create The Simpsons, basing the characters after his own family members, swapping “Bart” for his own name, which is also fittingly an anagram of the word “brat”.

There have been a few controversial points raised about the show over the years, occasionally being removed and banned from television screens in some countries. China banned it to protect its own dwindling animation industry, and  Venezuela barred the show as it was deemed “unsuitable for children”. Bart’s rebellious nature could be seen as one of the causes of this, pretty much getting away with anything ‘bad’ he does.

It’s this mixture of the ordinary with the extraordinary which makes The Simpsons so impactful, and the attention to detail and uniqueness of the characters is what makes it stand out above the rest. The fact that “D’oh” has been added to the dictionary and FOX owns the rights to the show until 2082 shows just how well the show has been accepted into contemporary culture.

And its legacy continues to create and adapt to remain current, with games, feature films and biblical amounts of merchandise ensuring that everyone still gets their Springfield fix. And if The Simpsons no longer quenches your appetite for animation, then shows like Futurama and Disenchantm