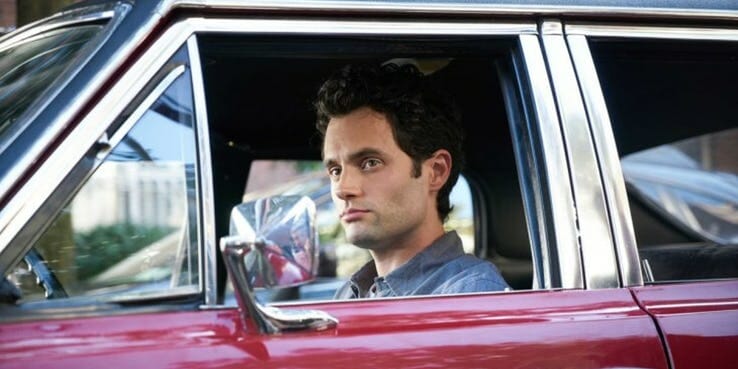 Since the release of The Ted Bundy Tapes on  Netflix, Twitter has exploded in an unexpected way. Netflix had thousands of tweets mentioning Bundy’s ‘hotness‘. So many in fact that Netflix US’ Twitter account sent out a tweet saying “there are thousands of hot men on the service- almost all of who are not convicted serial murderers”. It’s got me thinking, how often as a society do we romanticize aggressive and manipulative men?

When reviewing all shows that have come out focusing on a male serial killers it does seem peculiar that they all contain very classically good looking men. From Dexter (Michael C. Hall) , The Fall  (Jamie Doran) and to more recently: You (Penn Badgley). You is a Romcom Horror about Joe Goldberg (Penn Badgley) who falls obsessively in love with Beck (Elizabeth Lial) where he starts stalking her physically and electronically. Joe eventually manages to trick Beck into starting a relationship with him where he becomes controlling and sees her as his possession. Meanwhile, convincing Beck that he is a ‘good guy’ and a ‘feminist’ whilst portraying toxic behaviour. Eventually, *Spoiler Alert* he starts to murder everyone around her and inevitably Beck herself. It is a pretty damming portrayal of how manipulation in a relationship.

The response on Twitter is something that no one would expect. A sample of this: “Joe can serial kill me anytime he wants”. Penn Badgley himself came out in response to the insane onslaught of people normalising his characters behaviour. Badgley wrote “why audiences (are) still fascinated with a white evil man in the #Metoo era”. In one of the most progressive era’s in history, the fascination of the ‘beautiful angry man’ seems a poignant contradiction.

Similarly, Joe Berlinger’s (director of The Ted Bundy Tapes) new film (also about Bundy) called Extremely Wicked, Shockingly Evil, and Vile has had a character-driven cult-like fascination catered for audience reaction. Bizarrely, it stars Zac Efron – not usually typecast as the villain. The celebrity of Bundy as a Serial Killer goes back to his original trial. Due to the nature of his crimes, his trial was the first ever televised trial in history. Bundy became a sex symbol (oddly) with women sending him pictures of themselves dressed as his victims and attending his trial in support of him.

This trending glorification of evil and beauty could be toxic, though fortunately it would seem the industry are taking responsibility when necessary. Yet, there is something bizarre and almost uncomfortable about the opening episode of The Ted Bundy Tapes being called ‘Handsome Devil’. As an audience, there may come a point where we need to ask ourselves, are we romanticising heinous crime? Or are we simply infatuated with the historically dangerous ‘bad boy?’