RTS FUTURES – THE CROWN: FROM STORYBOARD TO SCREEN 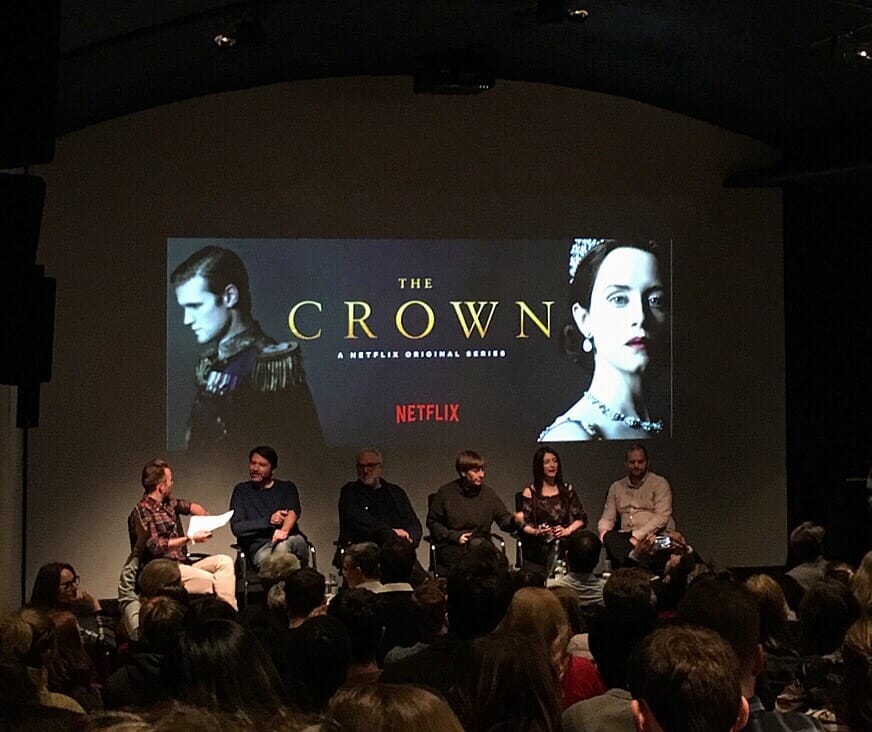 Last night, we were lucky enough to attend an amazing panel session headed by some of the creatives behind the critically acclaimed Netflix series, The Crown.

It was hosted by RTS Futures at The London Transport Museum, with the following giving the audience an amazing insight into how the show was created, from storyboard to screen:

There was a running theme across all in attendance when they were asked about the early stages of development. They all agreed that they read the script from the position of a fan to establish the immediate excitement that comes from the programme. Di Caula revealed that, much like a lot of Netflix viewers,  she binge reads the entire series over one weekend. After reading the script for the first time, it then comes to putting the script into action, with Caron stating it’s like “breaking something down like German engineering,” establishing where the budget is going to be spread and establishing the truth of the story in the script.

As you can imagine, there is a gargantuan amount of production that goes into something as high-budget as a Netflix series, with each episode costing over £7 million to make. Childs confirmed that there were 398 different locations throughout the first season and in one 20 second clip that was aired to the audience it was established that there were 7 different locations involved, ranging from a cliff’s edge in South Africa to the Thames. Later on in the evening we see a scene which involves a photo-shoot with Princess Margaret, with Caron revealing that it was shot in the same room as the first season of Dragon’s Den.

Being a historical programme, the history had to be refreshed to make it more appealing. The fact that the programme is chronological in nature suggests that the developments in technology, themes and fashion needed to be transformed by degrees. For example, in the second season, the royal wedding in 1947 was an austere affair, so this needed to be shown in the series without damaging the lavish feel of the entire show. All of the panel members watched copious amounts of films about the same era, helping them leave additional fragments of history to give the progression of time more substance.

Every member of the panel were apprehensively excited about the show. Turner realises the enormity of a VFX project at the script-reading stage, case and point when he read the script for The Crown and though, “there are bombers in this scene, that’s probably me.” The same can be said about the extensive costume design that Petrie had to manage, with additional clothing and accessories being required at all times to adapt to changes in fashion. The main challenge though seems to come through the conflict between truth and drama. They all agreed that the series didn’t set out to be a documentary, but the extensive team of researchers and designers helped create a historical backbone which allowed the writer, Peter Morgan, to explore the relationships of the characters a lot more intensely.

Many thanks to the panel members and The Royal Television Society for hosting – if you haven’t watched The Crown yet, make sure you do.