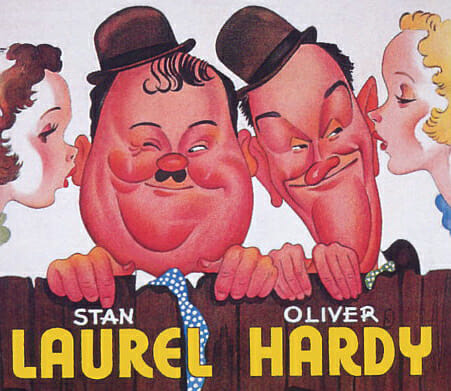 The new biographical film about two of the biggest names in show business is an epic bittersweet tale of ups and down, fits and starts, and laughter and crying. Written by Jeff Pope (the writer behind Philomena) the story follows the two greats through their turbulent twilight years as they embark on a tour through Britain.

The duo were a comedy duo act during the early Classical Hollywood era of American cinema, and they became renown during the 20s, 30s and 40s for their slapstick comedy, with Laurel playing fool and Hardy playing the bully.

Stan (played by Steve Coogan) and Ollie (played by John C Reilly) really encapsulate the duo’s relationship. A relationship that was filled with love and admiration but also peppered with distance and discomfort – their iconic way-out-west dance routine was delivered with absolute precision and their accents were eerily on point. But it was the performances by Shirley Henderson and Nina Arianda as the duo’s wives that really steal the show. Their wit, ingenuity and love for their husbands really comes to the forefront it times of real adversity.

At the 76th Golden Globe Awards, Reilly was nominated for Best Actor – Motion Picture Musical or Comedy, and at the 72nd British Academy Film Awards the film earned three nominations, including Best British Film and Best Actor in a Leading Role for Coogan.

We’re convinced that there will be many more nominations and accolades along the way, as well as a mass rediscovery of the duo’s back catalogue.